Posted at 18:32h in Uncategorized by antonio
0 Likes 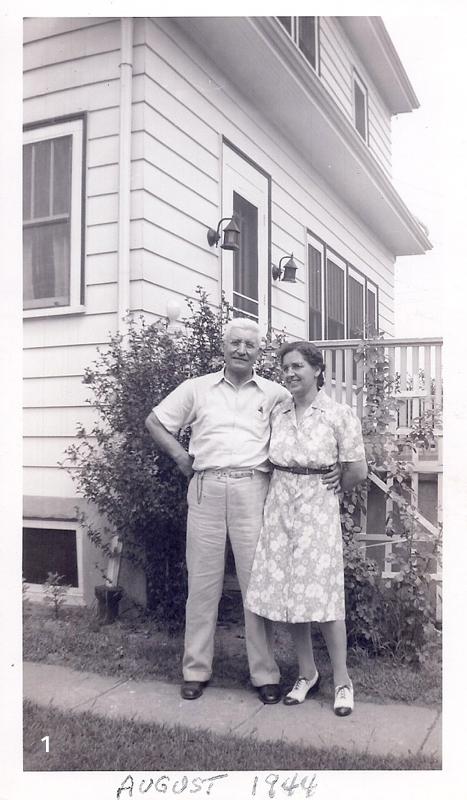 Although they lived less than two miles from one another in the District of Cento, Luigi Alberghini and Maria Govoni met and married each other in America.

Maria Govoni was born and raised on Via Buttieri in Renazzo. She lived with her parents – Carlo Govoni and Laura Ardizzoni – in the house with Carlo’s family that included his father Luigi Govoni, his mother Carolina Casari, two sisters, two brothers, and a half-brother.

Maria lived in Italy through early childhood, till she was about six years old. During that time a brother and sister were born, her father traveled to America for work, and she became aware of Luigi Alberghini seeing him on several occasions.

Luigi’s grandparents – Domenico Ranieri and Imelde Tassinari – lived on Via Renazzo a short distance from Maria.

Their home also housed Domenico’s business – a grocery store and a bar where people could additionally get a bite to eat. Maria would see Luigi at a distance when she was at his grandfather’s store.

Meanwhile, Maria’s father Carlo was
working in a cordage mill in Plymouth, Massachusetts. When
he had saved enough money, he returned to Renazzo, gathered up his
family and took them to America with
him. Upon arriving back in the United States, Carlo settled his family in Plymouth and continued his work as a laborer at the cordage mill. Eventually Carlo moved on to other factory jobs and relocated his growing family to Braintree, Massachusetts. During this time, Carlo and Laura gave Maria more sisters and a brother totaling a family of seven children.

Luigi Alberghini was born and raised on Via Valentino Govoni and its accompanying street, Via Maestrola, in Dodici Morelli where his family owned five buildings, one of which included a grocery store and the Alberghini Caffè, a practice carried forth from his grandfather, Domenico.

He made two trips to the United States. The first in April 1908 when he was 18 years old and traveled to his new world on a temporary passport, granted only after signing an Atto Di Sottomissione (Document of Submission). By signing this document he was committed to returning to Italy and serving his required three years of military duty. Following time lived in Massachusetts and Rochester, New York, he returned to Italy, and in the period before World War I, he served in the Italian Army in the 77th Infantry. 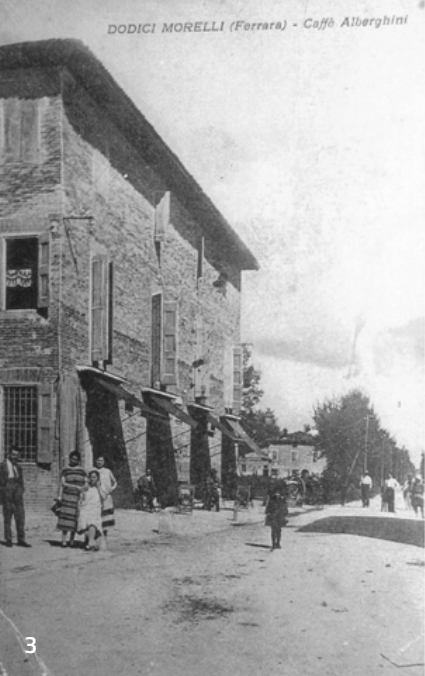 Luigi immigrated to America – the state of Massachusetts – in June 1913, leaving behind his parents – Ruffillo Alberghini and Maria Rosa (Rosina) Ranieri and his siblings: remains of a sister who died in infancy and a brother who died at ten years old from an accident at school, five living brothers and sisters, one who would die shortly after he left, and another sister who would be born and die without him even knowing her. After living in Massachusetts for several years he joined the United States Army and served two years during World War I thus serving the military in two countries – his homeland and his adopted home.

When Luigi met his darling Maria Govoni he was strikingly handsome in his U.S. Army uniform. She was reserved and reflective; being pursued by another man yet gave her heart to Luigi.

Known now by their Americanized names of Louis and Mary, they met through Mary’s frequent visits to her aunt, Erminia Ardizzoni and husband Domenico Tassinari, who lived in the house owned by Louis’s cousin, Amelia Dall’Olio and her husband Giuseppe Cevolani, in Somerville, Massachusetts, where Louis was also living. They married shortly before he was discharged from the Army and lived a brief time with the Cevolanis. They then made several other moves within Somerville where all four of their children were born – Alma Maria Rosa, Edvige Laura, Louis Ruffillo, and Maria Irma, before settling permanently in Burlington, Massachusetts.

The house they bought in Burlington was a white seven-room Dutch Colonial with indoor plumbing. It was 1931, the height of the great depression. Mary and Louis were industrious and frugal enough to survive. When Wall Street collapsed, Louis was part owner of an Italian specialty grocery story, C. Torrielli & Company in Boston, and later managed several Gloria Italian Food stores. He would work long hours in the store then go home to work in their chicken coop and garden. The extra work yielded more vegetables, chickens, and eggs than his family needed and Louis would sell these in his stores – all at a total profit for him. Because he would miss dinner during the week, Friday evenings were sacred family dinnertimes when they would eat together. Sunday noon meals were reserved for visits with extended family members.

Throughout their lives the jobs they held focused on two central themes – food and family with the exception of the immigrant experience of factory work. Both Mary and Louis worked in shoe factories, she until she was married and he during his first trip to the United States. As a married woman, in the tradition of women in Italy as the center, or perhaps more appropriately, the heart of the family, Mary’s occupation was now as a wife, mother, homemaker, and seamstress. In the Italian women’s extended role as central also to their community, Mary volunteered her talents on behalf of non-profits such as the 4-H organization.

The 4-H – head, heart, hands, health – was founded to help young people develop into productive leaders and contributors of their communities. Shortly after moving to Burlington, Mary began the 4-H Sewing Club for young girls. She taught them how to sew which included making their own patterns. She taught them how to exhibit at 4-H Fairs. Exhibiting at 4-H Fairs, where young people gathered from around the region, girls were given an item of clothing to make in competition. Mary’s volunteer work with the 4-H also included summer camps in Amherst, Massachusetts, a drive of more than 100 miles before highways became easy roads to travel. Her volunteer work with 4-H spanned more than a dozen years. 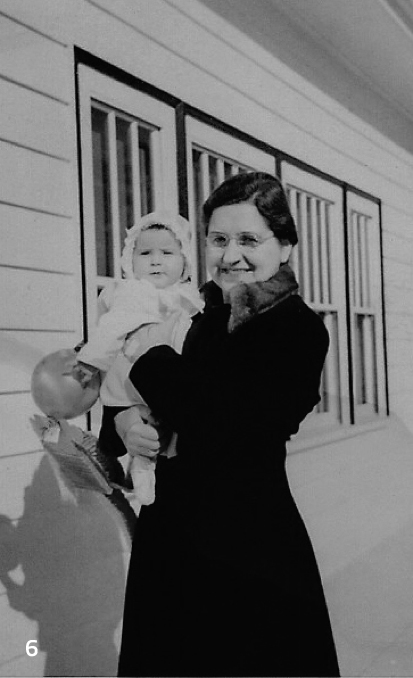 Mary’s sewing acumen saw the family through the years of the great depression. She made dresses for her daughters from
her own worn out dresses and even made a coat for her youngest
daughter, Irma, from an old coat of her own that sported a little fur
collar carried over from the old coat as well. She made underwear
from worn out bed sheets. She made sure each of her children had at least two changes of clothes, worn on alternating days.

Her work as a seamstress, creating chic and fashionable clothes of her own designs and making the needed patterns cut from old bed sheets or discarded paper, led to her job as a home economics teacher, which began after the Second World War when her children were grown. She started teaching adult education and while proficient in her subjects – sewing and tailoring – she was not a certified teacher. Her education was through the seventh grade only so the town sent her to a state college and there she took an intensive course regarding the adult learning process. She taught adult evening classes for three or four years. Periodically, she would substitute during the day in high school classes. Mary was patient, compassionate, and worldly, yet gentle and polite with a silent determination.

Louis continued his family’s devotion to the food industry. He was a waiter also during his first trip to America and again when he returned. Following his discharge from the Army, he took advantage of job opportunities for veterans. The path he chose of first becoming an insurance agent, a job he would return to later in life, led to a middle class life style. The heart of his work, however, was food. He owned several grocery stores in partnership with fellow paesanis – The Somerville Grocery Store in Somerville and C. Torrielli & Company, Inc. in Boston; he managed grocery stories – The Gloria Chain Stores, Inc. and Stella Chain Store in Boston, Chelsea and other towns; and he also owned several restaurants.

The Venice Café in Somerville was one such restaurant. Louis was one of the original owners in the late 1930s towards the end of the depression. It quickly became a popular place for Italian Americans and people of all nationalities at the time. The pride of the interior décor was a wall size depiction of Venice, Italy highlighting its canals. There were two separate dining rooms: a men’s only room usually filled with a rowdy crowd of heavy drinkers; and, a room for couples, women, children, and families – usually small families as larger ones could not afford to go out to eat. Each dining area had its own entrance from the sidewalk yet people could move from one dining area to the other through a large opening along the back of the restaurant beyond the dividing wall.

The heart of its menu selection and reputation was centered on homemade Italian food although it offered American dishes as well. The chefs were always Italian and included Louis’s wife, Mary, who made dishes at home and occasionally in the restaurant’s kitchen. Louis sold the restaurant early in its lifespan yet the Venice Cafè continued into the 1980s and though ownership changed over the years, it remained legendary as a popular hot spot for socializing and delicious Italian food. Louis was hard-working, held in high esteem by others, and had a reputation for being honest, industrious, and trust-worthy.

Life for Louis and Mary at their home in Burlington reflected vestiges of their life in Italy. Although they had assimilated into the American way before meeting and being married, they held their home in the hearts of their Italian homeland. They spoke their native language of Italian with each other and fellow paesani although both were proficient in English and spoke without a lingering Italian accent. They raised their own chickens and had a vegetable garden. They kept a jug of wine at the ready for every meal, and they had a cantina for curing meats and other foods in the basement of their home. They cooked at an outdoor brick fireplace and entertained family and friends under a white arbor covered in grape vines and which housed a long white table with white benches. They created their own Italian enclave.

I write this story as the family historian and the first born of their grandchildren. Growing up, I spent part of each day at their home, having lived next door. Now, I maintain the family records, research our heritage, and study the lives of our ancestors, committed to keeping their memories alive. 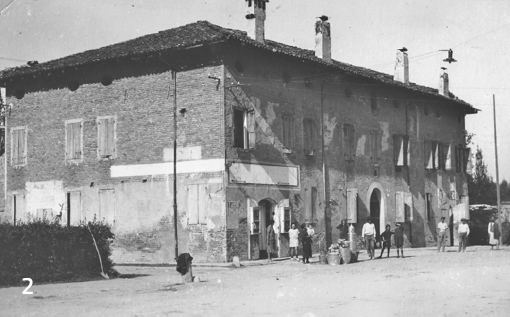 Via Renazzo, 123 Home of Domenico Ranieri and Imelde Tassinari, store on the left 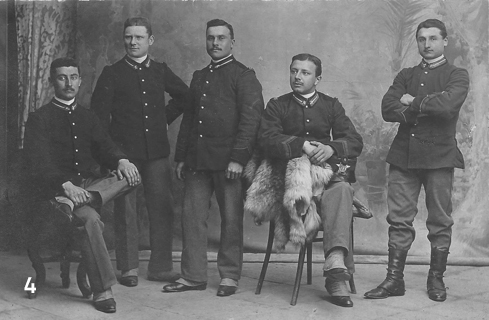 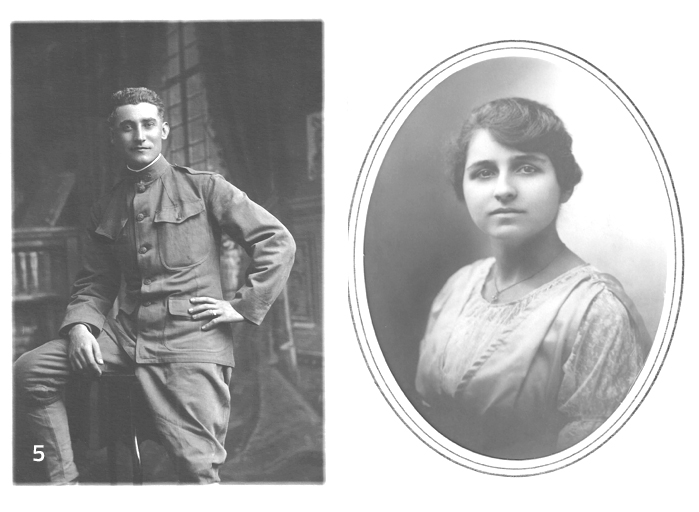 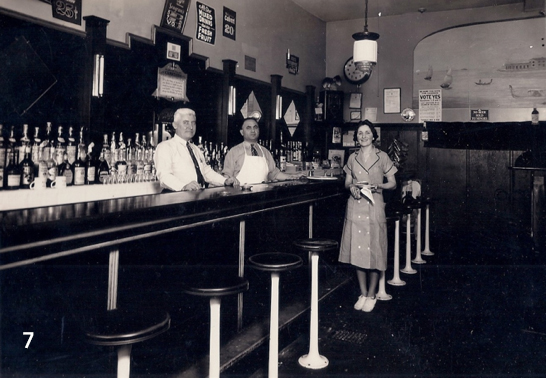 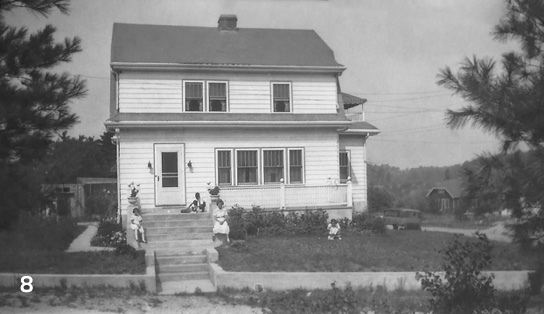